The Beijing Internet Court held a press conference for its first anniversary on Sept 3.

A promotional video themed on "Practitioner of innovation and revolution" was played at the conference to mark the court's first anniversary, which fell on Sept 9.

At the conference, Zhang Wen, president of the court issued a trial whitepaper. 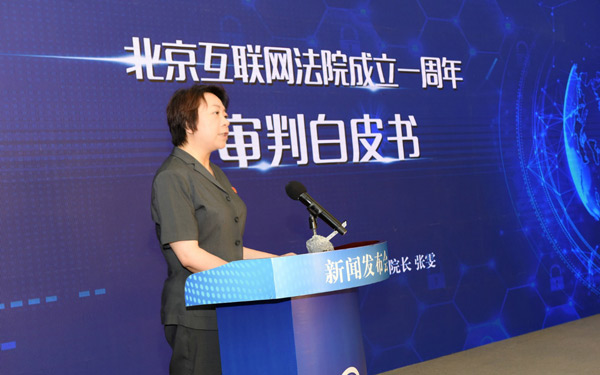 Zhang Wen, president of the court, speaks at the press conference on Sept 3.  [Photo/bjinternetcourt.gov.cn]

The whitepaper described the court's basic information, its diversified mediation mechanism, intelligent litigation services system, online litigation procedures standards, and achievements in trail proceedings in six parts. A group of hot internet-related cases tried by the court since its establishment was outlined in the whitepaper's appendix.

While introducing the most publicized internet cases tried by the court, the court's judges analyzed the legal issues involved in the internet new technologies, new businesses and new modes and shared their thoughts on how to handle the relation between encouraging innovation and promoting justice.

The Beijing Internet Court has effectively tackled the new challenges faced by the justice system in the internet era and contributed judicial wisdom and Chinese solutions to the rule of law in cyber space governance, according to Shi Jianzhong, vice-president of the Chinese University of Political Science and Law, added that he hopes the court will gain more internet trial experience that is reproducible and easy to promote.

Cai Huiyong, vice-president of Beijing High People's Court, concluded the conference, saying that the Beijing Internet Court has been working for internet litigation rules since its establishment and enhancing rule of law in cyber space governance. He encouraged the court to speed up its procedures and systems for trials, research, innovation and revolution as well as its development as a talents hub.