A whitepaper on rule of law of cyberspace governance was issued on April 29, when a forum of the same theme was held in Beijing. 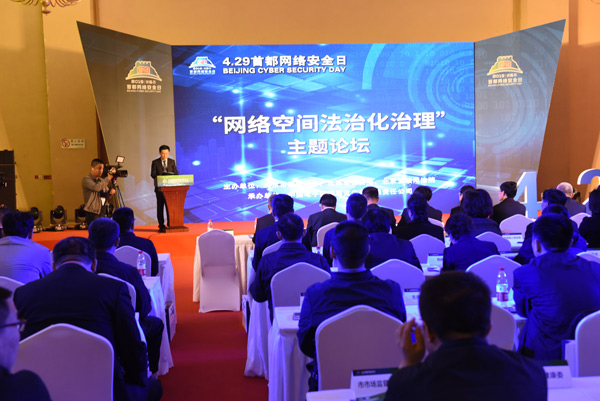 The first part briefed a series of measures taken by the Police Corps of Cyber Security to clean up the internet environment and protect netizens' vital interests against rising cyber crimes and cyber security threats, Zhang introduced.

A whitepaper on cyberspace law-based governance is issued on April 29, when a forum of the same theme was held in Beijing. [Photo/Beijing Internet Court]

The whitepaper's second part focuses on Beijing Internet Court's commitment to the rule of law in cyberspace since its establishment.

She introduced that the court has built an online lawsuit platform that integrates the entire process of trial online, including case filing, service of documents, meditation and verification of electronic evidence. With the whole procedure online, the litigants can attend a trial without appearing at the court,

Beijing Internet Court has been taking a leading role in the construction of a electronic evidence platform called the Scale Chain, or "Tianping Chain". A trial service platform integrating data generation, evidence recording, evidence obtaining and validation has come into shape. It helps to crack the difficulties in recording, obtaining and validating electronic evidences for Internet-related cases.

Moreover, the court has set an electronic evidence platform to alleviate difficulties in coping with evidence in Internet-related cases and an online "e-mediation platform" that overcomes limits of location.

The court has also been keeping dynamic pace with practical needs of IP cases in its exploration of the rules of cyber governance.

By hearing the case of Douyin, a widely-used short-video platform, Beijing Internet Court determined critical ruling standards for short videos and put forward proposals to protect copyright on the Internet.

The forum was co-sponsored by the Beijing Cyberspace Administration, the Beijing Public Security Bureau and the Beijing Internet Court.